Please join me and other Catholic bloggers at RAnn’s Place for Sunday Snippets, where we share posts from the previous week.

I’ve had a very busy week, so my one and only post was on Friday:

On Monday, I’m heading down to Dallas/Fort Worth for the Catholic Writers Conference Live and Catholic Marketing Network Trade Show. I’ll be taking the week off from blogging and will return the week of September 3rd.

Here are my takes:

2. To NFP or Not to NFP
Great article on Natural Family Planning at the Catholic News Herald.

3. Teresa Tomeo’s Take on 50 Shades
If you’re wondering what I think about the 50 Shades phenomenon, Teresa Tomeo captured my thoughts precisely in an article entitled “Grey is the Devil’s Favorite Color.” 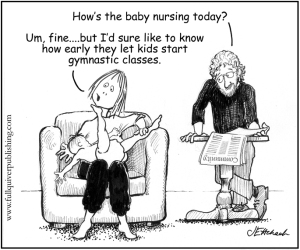 5. Husband’s New Kayak
My husband is thoroughly enjoying his new kayak. I’ve accompanied him on a few of his “just after sunrise” kayak rides. Nothing like sitting back and listening to the quiet sounds of nature.

6. Full Quiver Publishing’s New Website
My publishing company’s website will soon get a new look, thanks to our friend and web developer, Mark Cassanto. It will be unveiled soon!

7. Loreena McKennitt Concert
Yesterday morning, I bought tickets to Loreena McKennitt’s upcoming concert on December 1st at the National Arts Centre in Ottawa. Needless to say, I’m pretty excited as she is one of my all time favorite performers.

Please join me and other Catholic bloggers at RAnn’s Place for Sunday Snippets, where we share posts from the previous week.

Here are my posts:

A Simple Trip to the Mall

After having my kids tell me that “you have EVERYTHING in your purse,” I decided to do a Quick Takes on items found in my purse. I won’t include mundane things like wallet, keys, business cards and cell phone. The following items aren’t unique to me, but they may seem unusual to others.   Share one item in your purse (below) for a chance to win a print copy of my third novel, Stealing Jenny. 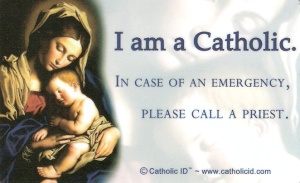 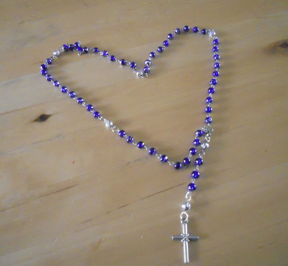 3. Kindle
I never know when I’m going to have a few free minutes so I always carry my Kindle with me. In a pinch, I also have 3G on my Kindle so I can check email. 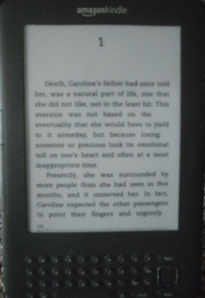 4. Stealing Jenny
I often carry a copy of my latest novel in my purse (yes, my purse is a fair size).

5. Guitar pics
I don’t play guitar but the other six members of my family do. If I had a dollar for every time one of the kids or James says “I need a guitar pic,” I’d be rich. And I’m usually able to say, “I do.” Always good to be prepared.

6. Nuts, crackers or granola bar
I usually have some sort of snack food in case I’m delayed somewhere and one of the kids or myself is hungry. It’s always good to have a snack.

7. Plastic spoons and forks
One would be surprised to know how often we need a spare spoon or fork, although admittedly, I’ve lent these out more than I’ve used them.

What are some unusual items in your purse?  Comment (before Friday, August 24th) below to be entered to win a print copy of my Amazon Kindle Bestseller, Stealing Jenny.

Last Friday evening started as a simple trip to the mall in nearby Ottawa, Ontario. My husband and I were leisurely shopping, enjoying each other’s company. We stopped at the popcorn place to pick up a snack then I told my husband I would return after going to the restroom.

On the way, I noticed a commotion by the computer store: a group of paramedics working on an unconscious woman on the floor. One was performing CPR. I recited a Hail Mary for the woman then began saying the Divine Mercy Chaplet while I headed into the restroom. When I came out, it looked like they had stopped doing CPR. I wasn’t sure whether it was because she had died or whether she had begun breathing again. A large crowd continued to gather. Most people seemed genuinely concerned instead of merely curious.

When I returned to my husband, he offered me some popcorn, which I refused. It didn’t seem right to be sitting and eating popcorn while a woman was fighting for her life or perhaps had lost it a short distance away. Together, we said a prayer for the woman as we walked out of the mall.

It got me to thinking, however. And brought to mind the fragility of our earthly life, the absolute temporariness of our life here on earth.

It also reminded me of another woman, who in 1909, was going on a simple trip across the street in Philadelphia to pay the rent. She was the mother of ten children, the youngest, 18-month-old twins. As she was crossing the street, she dropped dead of a brain aneurysm. That woman was my great-grandmother, Mary Smith Hamilton (1866-1909). She was only 43 when she died suddenly and left a houseful of ten children for her husband and oldest daughter to raise (my paternal grandmother, Margaret Hamilton Gable 1907-1988, was one of the twins).

These tragic incidents remind me of how vigilant we should be about our spiritual life and how we shouldn’t wait until tomorrow to improve ourselves and try to be better…because our death could happen at any time, on our way to the grocery store, while sitting at home watching TV, walking across the street to pay the rent or…during a simple trip to the mall. 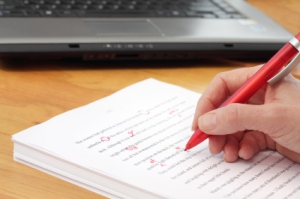 My latest post for the Catholic Writers Guild Blog is a reprint and talks about working with an editor.

Self-published authors should not publish a manuscript without hiring a competent editor to improve and polish it.

For the purposes of this post, an editor is someone who suggests changes in overall plot, setting, characters and theme. I am not talking about a copy-editor (although copy-editors are important too).

Before I started writing fiction, I had written many non-fiction articles. I mistakenly thought fiction would be easier. The first draft of my debut novel, Emily’s Hope, was so bad that when I gave part of it to my kind (and honest) husband to read, his response was, “You’re not going to let anyone read this, are you?”

Admittedly, I was crushed. I hired an editor and over the next two years, she helped me to take a badly written first draft and transform it into a much better novel. She helped me not only to improve my writing style, but to also create a convincing narrative voice.

Here are a few key points to remember when working with an editor:

Be Humble: If you think your book is going to be a Nobel prize-winning book or that it’s the best book ever written, well, it probably isn’t, not yet anyway. It may have the potential of being a great book but, generally speaking, most books need a lot of polishing and editing to get it to the stage of being “great.”

Like many authors, I spend more time polishing and editing than I do actually writing the first draft.

Consider and Reflect on Each Criticism/Suggestion: It may take hours or days of reflection to realize that most of the editor’s ideas will actually make the book better.

Authors tend to be blind to the defects in our own works. Some of us can be rigid with regard to what we want the story or characters to be. For example, in my second novel In Name Only, the first draft was entirely from the main female character’s point of view (POV).

The editor said that she understood why I chose that particular POV, but either I needed to include the major male characters’ POVs or find another way for the reader to understand and bond with the male characters better.

I initially rejected the idea of including the male characters’ POVs. Then as time passed and, as I reflected, I admitted that she might be right. As it turned out, writing from a male POV was also great fun. This novel went on to win a Gold medal in the IPPY awards and is currently is an Amazon Kindle top five bestseller in Religious & Liturgical Drama.

You Don’t Have to Agree with Everything: Sometimes, the editor will suggest changes the author is reluctant to make. If, after reflection, you still feel strongly about keeping things the same, talk it over with the editor. I find I usually agree with about 85 percent of the suggested edits and I disregard the rest.

Trust Your Editor: If you don’t trust your editor, you should probably find another editor.

Working with an editor can be a challenging experience. However, if you exercise humility, consider and reflect on each edit, be open to change, resist the urge to be defensive and trust your editor, you will hopefully produce a great quality book.

Please join me and other Catholic bloggers at RAnn’s Place for Sunday Snippets where we share posts from the previous week.

Here are my posts:

My Quick Takes Post today is an all photo quick takes:

Below are some of my favorite James Hrkach portraits (not in any particular order).

1. Ellie Feet Up (charcoal and Gesso on paper, 1987) I was pregnant at the time this painting was done, and not feeling like doing too much. 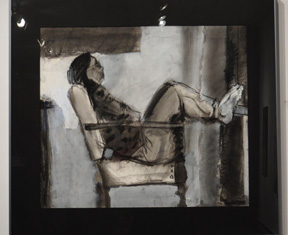 2. Ellie and Josh (oil on canvas, 1988) Sorry for the off kilter lighting of this one…this is me with our oldest son, Josh, then a year old.

3. Josh with Boots (oil on canvas, 1997) Again, our oldest son about ten years after the previous painting. 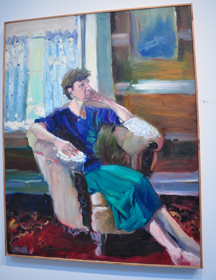 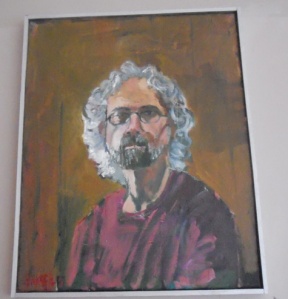 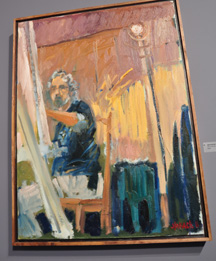 7. Four Nine and a Half (oil on canvas, 1985). My husband sold this painting back in 1986 and I don’t have any photos with just the painting in it, (this is my husband and me along with my mother-in-law and sister-in-law back in 1986 attending the art show that exhibited this painting). This is my favorite of James’ paintings of me and it’s now hanging in someone’s big house somewhere near Port Dover, Ontario (sigh).

Most of these paintings were recently exhibited at the Cornwall Regional Art Gallery in Cornwall, Ontario.

My third novel, Stealing Jenny, is FREE today and tomorrow on Kindle. Click on the link below to download the book for free:

“Stealing Jenny is a gripping novel filled with engaging characters, a compelling mystery and a message which underscores the precious dignity of life. I literally couldn’t put it down and give Stealing Jenny my highest recommendation.” Lisa M. Hendey, author of “A Book of Saints for Catholic Moms”

“Ellen Gable is a masterful storyteller.Stealing Jenny is a smoothly written, chilling tale of gripping suspense. There are terrifying moments and heart-wrenching moments. Catholic faith and hope are tested. Above all, the sacredness and privilege of precious new life is made indisputably evident I never wanted it to end!” Therese Heckenkamp

“Stealing Jenny will keep you on the edge of your seat and probably destroy your sleep pattern as you stay up to find out what happens.” Sarah Reinhard, author, “Welcome Baby Jesus: Advent and Christmas Reflections for Families” 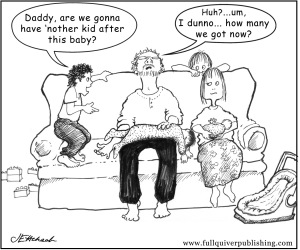