1. Black Friday Deals at Full Quiver Publishing!
You don’t need to leave the comfort of your home to receive great deals! Do you receive my publishing company’s newsletter? If you don’t, you’re missing out on some great deals! Until December 3rd, ALL FQP BOOKS (including my five books) are on sale for 30% off! Want the coupon codes? Just email me to sign up for our newsletter fullquiverpublishing(at)gmail.com and I will forward you the latest newsletter with the codes.

4. Another Train Photo
This photo was actually another one that was in the running for the front cover of Family Foundations magazine.

5. For Locals! Book Signing Tomorrow!
I’ll be at the CWL Christmas Bazaar at Our Lady of Perpetual Help Parish Hall in Braeside, Ontario tomorrow from 8:30 to 12:30 signing and selling my books. The delightful Ida Gravelle will also be with me signing her book, Dancing on Friday.

Image copyright Full Quiver Publishing Please do not use without permission

I’ve had a busy week! Today’s quick takes will be a series of cool photos that were taken as part of a photo shoot for Family Foundations magazine. Special thanks to Tim Baklinski of Two Trees Photography for these wonderful photos. The photographer basically said, “Smile, but don’t move!” Yes, the train was loud and, yes, it was a bit nerve-wracking standing beside a moving train!

(I believe this last one is the photo they used inside the magazine).

Lisa Hendey, author of “Book of Saints for Catholic Moms” and “Handbook for Catholic Moms,” has written a wonderful new book, entitled “The Grace of Yes.” Today, for its launch, she has asked people to share how we say “Yes” to God in our everyday lives. I’m linking up with other bloggers over at Catholic Mom.

For me, saying “Yes” to motherhood has been the most joyful and grace-filled way to say “Yes” to God. In this updated article from a few years ago, I share what that all means:

On June 26th, 1986, I was rushed into surgery to remove a tiny baby from my right fallopian tube. This, after already miscarrying his or her twin from my womb. I woke up in the hospital with the knowledge that I had conceived twins…and I would be leaving the hospital with neither in my arms.

Thankfully, a year later, after nearly nine months of morning sickness, I gave birth to a healthy baby boy and, two years after that, a strapping nine pound son. This was followed by two miscarriages and these losses had me questioning whether we should continue to be open to life. Despite the losses and difficulties, our third son was born in 1992. Even after my tumultuous history, my husband and I decided to be open and, not long after, became pregnant. A short while later, I found myself fighting for my life.

In the ambulance, as I drifted in and out of consciousness, I didn’t have much time for retrospective thoughts, except “Please God, I can’t die. I don’t want my little boys growing up without a mom.” I was bleeding internally, the complications of ectopic pregnancy surgery two weeks previous, and quickly becoming weaker and weaker. Waking up later in the recovery room, I was thankful to be alive.

“You should not be having any more children.” The words were harsh and at first, James and I took them as truth. I was capable of having more, but after two ectopic pregnancies and complications from one of the surgeries, we were told that we must limit our family to three boys. The doctors suggested that I be put on hormonal contraception (we refused and instead used NFP). They later urged me to have my remaining fallopian tube tied (we again refused). The physicians weren’t the only ones to give the ‘order’ to stop having children. Well-meaning relatives and friends felt it was their duty to tell us that we should not get pregnant again. “You don’t want to be irresponsible, do you?”

Initially, in those first few weeks after my surgery, we felt that we ought to listen to the “doctor’s orders.”

However, as the months went by, I began to regain my strength. We continued using NFP in the most conservative way, often adding one or two days to the rules for extra security. A year later, with heaviness in my heart, I thought of the future and the fact that we would not have anymore children. I wondered whether God was calling us to actively seek another pregnancy. My husband and I discussed it, then brought our concern to our spiritual director, explaining that the doctor had “ordered” us not to have more children. “James and Ellie,” he said, “that is a decision to be made between the two of you and God.” He encouraged us to pray about it and he further recommended that we talk to a faithful Catholic doctor. We knew of a Catholic physician through a neighboring homeschooling community. Her response after reviewing my file was that we could try for more children, but that I would need to be monitored carefully in the first several weeks to confirm that it wasn’t another ectopic pregnancy.

For the next several months, we prayed together. We deeply desired another child, but we did not want to be careless or irresponsible. After much prayer and discernment, and weighing all the risks, we decided to say “Yes” to God and actively seek another pregnancy.

Ten cycles later, we were still not pregnant. We felt at peace with our decision to seek another pregnancy and, although disappointed, we trusted that God knew what He was doing. Eventually, we stopped charting. Another eight cycles went by with no pregnancy and I began to sell off most of my baby furniture. A few weeks later, it dawned on me that I hadn’t had a period in six weeks. The next morning, I took my temperature and it was 98.9. After 18 months of saying no to us, God was saying “Yes” and blessing us with another eternal soul. I was thrilled that another new life, the fruit of our love, had begun, and would be sheltered lovingly in my womb.

With the blessing, however, soon came suffering. I’m four feet nine inches tall, so even my healthy pregnancies had been challenging, but this one even more so. I began having debilitating migraine headaches and some days I could not get out of bed. I developed a hernia and my stomach was so large that, by 30 weeks, I could not drive and even walking became painful. Worse than the physical pain, however, was the emotional suffering. Doctors, well-meaning friends and relatives scolded us for being “irresponsible” and “selfish,” and that if I was suffering, “I had asked for it.”

Our fourth son was born healthy, at nearly ten pounds. The pro-life Catholic doctor who delivered him by C-section told me that we could try for another baby someday, but that the pregnancy would again have to be monitored. After another miscarriage, three years later, our youngest son was born.

Saying “Yes” to motherhood meant enduring four miscarriages and three ectopic pregnancies and, with those, the physical and emotional suffering. But saying “Yes” to motherhood has also brought overwhelming joy with the births of our five sons, continued graces and the consoling knowledge that our seven unborn children will greet me one day in heaven.

When we were a young married couple, I naively thought having children would be “easy.” I had no idea of the sufferings I would endure, but equally, I could not imagine the kind of joy being a mother could bring. Although we could have used NFP to limit our family size to three sons, we chose to listen to our hearts, to answer God’s calling, and to say “Yes” to more children. When I consider that our two youngest sons might possibly not be here today, my heart becomes heavy. Both are unique young men who have already given so much to our family and to society.

Despite the difficulties, I am grateful that I said “Yes” to motherhood, continue to say “Yes,” and feel tremendously blessed to be the mother of five unique, talented and amazing human beings here on earth as well as those seven little souls waiting in heaven.

Welcome to Seven Quick Takes Friday, hosted by the lovely and talented Jess at This Ain’t the Lyceum.

Remember when I reviewed this book? 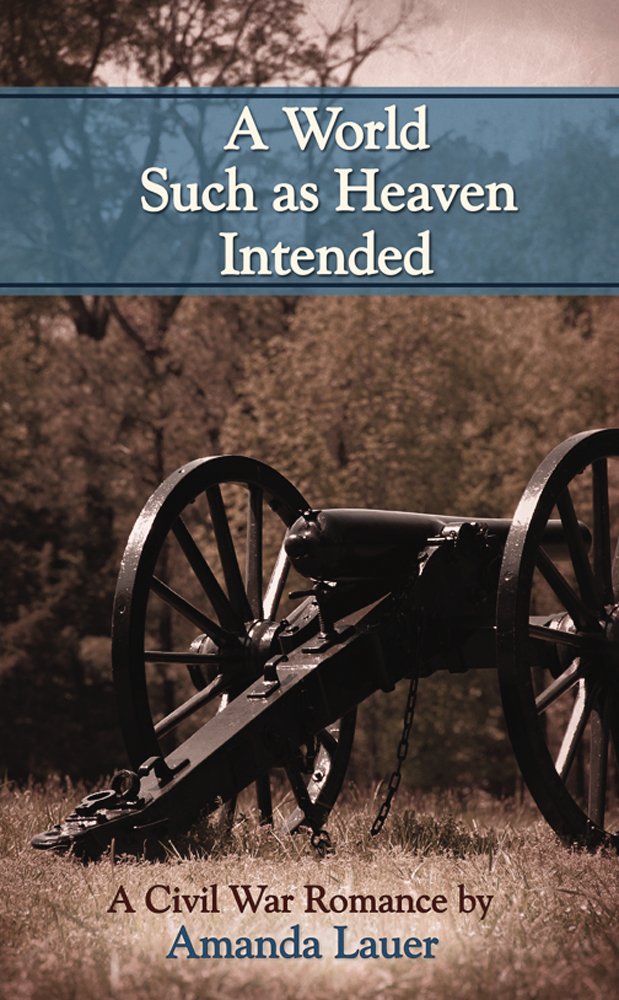 The author of A World Such as Heaven Intended has stopped by the tomato pie shop to have a little chat with us.  Let’s welcome Amanda Lauer!

An avid reader and history buff since childhood, Amanda Lauer fulfilled a lifelong goal with the publication of her debut novel, A World Such as Heaven Intended. Lauer learned the technical aspects of writing as a proofreader in the insurance, newspaper and collegiate arenas. Over the last ten years she has had more than twelve-hundred articles published in newspapers and magazines throughout the United States. Lauer is the co-author of Celebrate Appleton, A 150th Birthday Photo Album, and contributed to the books Expressions of ITP…Inside Stories, and Living Virtuously —…

1. Photo at the Library of Madonna House
Special thanks to Tim Baklinski who took this lovely photo (along with all the other photos for Family Foundation magazine a few months ago)!

3. Mini Review of The Grace of Yes by Lisa Hendey
The Grace of Yes is a moving, inspiring, challenging and entertaining look at the virtues. I was especially touched by the personal experiences Hendey shares. It is beautifully written in conversational tone and is a book that can be read and reread over and over. While I loved the author’s other books, this one has become my favorite. Highly recommend!

5. Voice of Chaste Same-Sex Attracted Catholics Absent from Synod
Interesting interview with Fr. Paul Check, of Courage International at LifeSiteNews. FQP’s book, The Lion’s Heart, was published earlier this year and deals with same-sex attraction and is endorsed by Courage International.

image copyright James and Ellen Hrkach (all rights reserved, please do not use without permission)

Today is Remembrance Day/Veterans Day. I’d like to remember in a special way my father, father-in-law and stepfather (all now deceased). Each served their country in war: my father-in-law was in the United States Air Force during World War II and was Missing in Action for months, my father and stepfather (my father’s first cousin) both served in Korea. This is also my father’s birthday. He died in 1978 at the age of 49.

Remembering Tony An article about my father-in-law, who was a gunner for the USAF in WW II. He was shot down over Yugoslavia, near his father’s birthplace.

Remembering Dad A tribute to my own father, who served in both the USMC and the United States Army, and who died when I was 18.

This last post is a special way to remember, with fondness, the three father figures in my life: Remembrance Day/Veterans Day 2009