copyright James and Ellen Hrkach. Please do not use without permission!

New video for Advent! Be part of the antidote of society’s impatience to celebrate Christmas even before Advent begins! 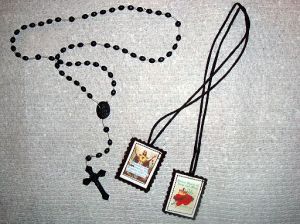 My latest post from Catholic Mom is entitled, “What Our Catholic Ancestors Can Teach Us About the Faith.”

When a great uncle of mine passed away years ago, his closest family members went through his belongings, as per his wishes, and took mementos. A box was left over, I was told, of “religious items,” and I was asked if I’d like to have the box. As one of the few practicing Catholics in our extended family, I gratefully accepted the box.

I was delighted to find three Latin/English Missals from the 1940’s and 50’s, religious statues, rosaries, holy cards, a scapular and other Catholic sacramentals.

When my mother died eight years ago, my siblings and I went through her jewelry box. I was surprised to find a beautiful cameo miraculous medal and a card enrolling my mother (then a young teenager) in the “Miraculous Medal Society.” I now wear my mother’s miraculous medal.

My father, who died when I was a teenager, frequently recited the rosary. One image I recall from his wake is of my father, peaceful in death, his hands clutching his rosary.

Catholic sacramentals have somehow lost popularity. While many Catholics still wear medals, the displaying of religious statues, icons and other sacramentals in Catholic homes is not as common anymore. Strictly speaking, it is not obligatory to use sacramentals. However, since they are reminders, they do help us in our journey towards heaven.

Our Catholic ancestors did not shy away from the faith. With few exceptions, they went to Mass every Sunday (with their Latin/English missal) and attended Mass often during the week, they abstained from meat on Fridays, recited the rosary, wore medals, proudly displayed crucifixes in their homes and religious statues in their gardens. Most had holy water fonts in their homes. They proudly proclaimed their faith and were not ashamed.

When my parents attended grade school and high school in the 1940’s, catechism was memorized and learned from an early age. Young Catholics knew and understood when sin was sin; there was no watering down of the faith. There was no “subjective truth.” Pre-marital sex and contraception were sins and even if they fell into temptation and took part in these acts, they knew it was sinful and headed to confession immediately.

Sacramentals remind us of our faith. They remind us that our life here on earth is temporary and that heaven is our goal.

To find out more information on the importance of sacramentals, check out this helpful link:
http://www.fisheaters.com/sacramentalsintro.html

For the next three days, the stand alone sequel to my second book,A Subtle Grace (Kindle edition) will be FREE until Wednesday!!

Of A Subtle Grace, Trisha Niermeyer Potter of Prints of Grace Blog said, “This is one of my favorite contemporary works of Catholic fiction. The storytelling is masterful, the characters fascinating, and the writing is of high literary quality. People are imperfect—past, present, and future—but each is given the opportunity to grow, change, learn, and be redeemed. In this story it’s shown how the greatest mistake of our lives can be turned into one of the most amazing blessings and even be a source of hope for others. A Subtle Grace has all of the elements that good Catholic fiction should.”

In her review, Jean Heimann, Catholic author and blogger, wrote that “In A Subtle Grace, Gable shows us through her characters, what happens when an individual lives his/her life based on principles rather than on passions. She clearly conveys the differences between love as a feeling vs. love as a choice, illustrating the consequences of each. Themes of redemption, forgiveness, discerning one’s vocation, healing, hope, and joy, all contribute to make this a story that tugs at the heart. A sequel to In Name Only, A Subtle Grace works well as an independent, stand-alone novel. You will definitely want to read both. A Subtle Grace is excellent read for historical romance fans. Those who enjoy Christian romance and suspense novels will find this story particularly enjoyable. This is a winner!”

Therese Heckenkamp, award-winning author of Frozen Footprints says, “A Subtle Grace is the sequel to the lovely book In Name Only, yet A Subtle Grace can be enjoyed independently. Of course, readers of the first book won’t want to miss this one! The story kept me so interested that I hardly realized this was, in fact, a lengthy book. A Subtle Grace is a novel to stir your heart, your emotions, and your soul. I highly recommend it!”

Click here to read an excerpt and more reviews.

Today is Remembrance Day/Veterans Day. I’d like to remember in a special way my father, father-in-law and stepfather (all now deceased). Each served their country in war: my father-in-law was in the United States Air Force during World War II and was Missing in Action for months, my father and stepfather (my father’s first cousin) both served in Korea. This is also my father’s birthday. He died in 1978 at the age of 49.

Remembering Tony An article about my father-in-law, who was a gunner for the USAF in WW II. He was shot down over Yugoslavia, near his father’s birthplace. 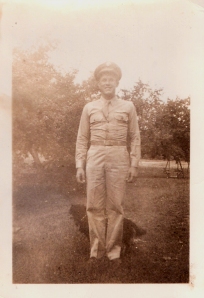 Remembering Dad A tribute to my own father, who served in both the USMC and the United States Army, and who died when I was 18.

This last post is a special way to remember, with fondness, the three father figures in my life: Remembrance Day/Veterans Day 2009 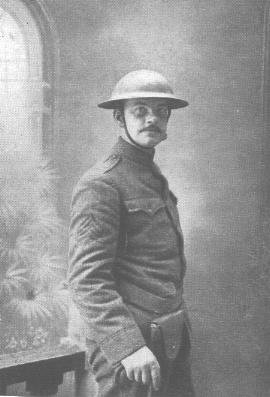 During this week of Veterans Day and Remembrance Day, I’d like to share a poem from World War 1.

In doing research for my novella, Julia’s Gifts, I found this beautiful and moving poem by Alfred Joyce Kilmer, entitled, “Prayer of a Soldier in France,” where Kilmer compares the soldier’s journey to Christ’s passion as a prayer for perseverance.

Prayer of a Soldier in France (1918)
My shoulders ache beneath my pack
(Lie easier, Cross, upon His back).
I march with feet that burn and smart
(Tread, Holy Feet, upon my heart).
Men shout at me who may not speak
(They scourged Thy back and smote Thy cheek).
I may not lift a hand to clear
My eyes of salty drops that sear.
(Then shall my fickle soul forget
Thy Agony of Bloody Sweat?)
My rifle hand is stiff and numb
(From Thy pierced palm red rivers come).
Lord, Thou didst suffer more for me
Than all the hosts of land and sea.
So let me render back again
This millionth of Thy gift. Amen.

Bishop Thomas Olmsted of the Phoenix Diocese has made a challenge to all Catholic men to come into the breach. Watch the trailer below, read the beautiful exhortation and please share with all the men in your life.