As I’ve said before, authors should always be prepared by having copies of their books with them (especially in the car).  An author never knows when the opportunity will present itself to sell a book!

But, by far, the strangest place I’ve ever sold one of my books was at a local club/bar.

Now, I never go to bars or clubs, but on this particular night about eight years ago, my husband was performing with his jazz fusion band. During one song, he actually plays two different guitars. My husband is a very talented guitarist (see video).

That night, as I watched my husband perform, I noticed a tall fellow swaying to the music and staring at my husband. When the song finished, the band took a break. The tall man ran off in the direction of the stage. I followed close behind. The tall man spoke to my husband with the adulation of an adoring fan.

“Man, you’re the best guitarist I’ve ever seen! The way you play those two guitars…it’s just incredible! You’re better than Mick Jagger,” and he went on to list three or four other famous guitarists.

Now, my husband has enough humility for both of us. So he didn’t respond to the praise. Instead he looked my way and said, “This is my wife, Ellie.” My husband’s newest fan turned to me. “Your husband is the most incredibly talented guitarist I’ve ever seen or heard.”

“Isn’t he amazing?” was my response.

“He sure is.” We chatted for a few moments, then, out of the blue he said, “He’s so good, you should write a book about him.”

I burst out laughing. “Well, actually, I have written a book. It’s a novel called Emily’s Hope and it is loosely based on my life…and my husband is a major character in the book.”

“Do you have any copies with you?” I responded, “Of course.”

Admittedly, this 40-year-old tipsy man probably was not the target audience for my first novel. And…my husband felt I took advantage of a fellow who was drinking, and perhaps I did. But, well…a sale is a sale.

Humor aside, I’ve often wondered about this fellow who walked into the bar to have a good time and walked out with my novel in his hands. I would’ve liked to have been a fly on the wall when he started writing a religious novel with Theology of the Body themes. I hope he’s doing well.

“The fact is, as experience shows, that new life is not the result of each and every act of sexual intercourse.” Pope Paul VI, Humanae Vitae

This year, Pope Paul VI’s encyclical, Humanae Vitae (On Human Life) turns 50.  Humanae Vitae re-affirmed the Church’s 2000-year teaching that artificial birth control was immoral and “intrinsically evil.” To celebrate this milestone, I’ll be re-posting many of my NFP/Theology of the Body-themed articles.

God’s natural and beautiful design is that women are only fertile for a short time each month. Taking into account ovum life (48 hours at most) and sperm life (up to five days depending on the type of mucus in the woman’s body), there are approximately seven days in each cycle that a woman is fertile. Other factors include each woman’s particular level of fertility: the type of mucus, their age (the younger they are, the more fertile) and the man’s level of fertility (sperm count and quality of sperm).

Contrary to popular belief, the Catholic Church does not teach that a couple must actively seek pregnancy each and every time they engage in marital relations. But she does teach that intercourse must at least implicitly retain its procreative meaning and be open to life. Contraceptives destroy the conjugal act’s procreative aspect. Therefore, if the couple has serious need, and spacing or avoidance of pregnancy is desired, they may use Natural Family Planning, that is, have relations only during the infertile time.

Natural Family Planning is safe, healthy and effective and works as good, if not better, than most of the popular birth control devices and without the unhealthy side effects of contraceptive devices and drugs.

Let us pray each time we approach the marital bed: “I promise to be faithful to you. I come here freely, I love you totally and I am open to creating children with you.”

For more information on NFP:

Pope Paul VI, author of Humanae Vitae, On Human Life, was criticized when he released his controversial encyclical back in July of 1968.  He stated that artificial birth control was “intrinsically evil.”  He also foresaw the events that are happening in our world today. The video below from Bishop Robert Barron shares some of most interesting prophecies from Pope Paul VI.

Every year, on Epiphany Sunday, we bless our home with the saying “Christus Mansionem Benedicat: May Christ Bless this House,” and write with chalk on each of the lintels to outside doors.  The letters CMB are an abbreviation of the Latin saying above, and they’re also the first letter of each of the names of the three wise men: Caspar, Melchior and Balthazar. To find out more about this beautiful tradition, click here. 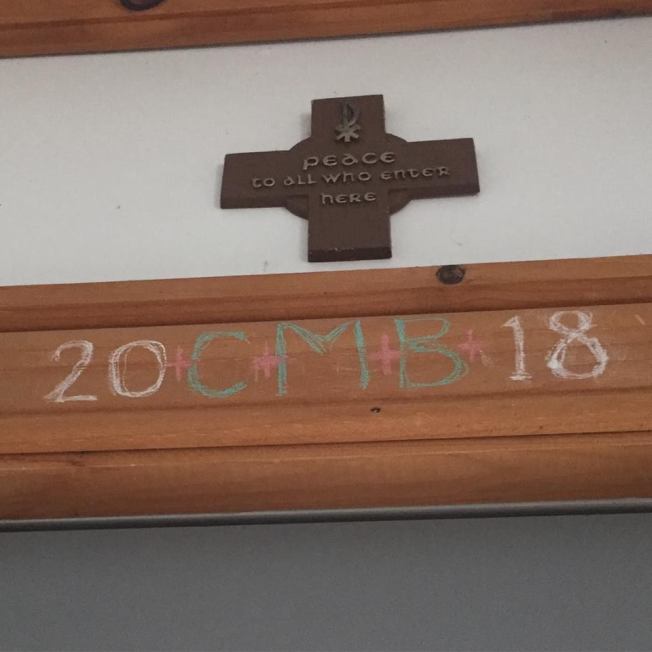 Happy New Year!  Today, I’m joining with Carolyn Astfalk and Catholic Mom for “An Open Book.”  Here’s what I’ve been reading this past month and will be reading in the weeks to come!

These true, personal stories will deepen your faith and show you the blessings in your life. They’ll leave you smiling and inspired, ready to share your renewed Christmas spirit.

And we didn’t forget that miracles happen during the rest of the season, too, with stories about Thanksgiving, Hanukkah and New Year’s. There’s something for everyone in these joy-filled pages, and you’ll be supporting Toys for Tots as well, creating miracles for children all over the U.S.

My review:  I enjoyed this book, although it contains stories from other Chicken Soup books so it’s mostly a rehash from other books.  But it was entertaining and exactly what I needed to read during the holidays.

The House on Foster Hill

Amazon Synopsis: Kaine Prescott is no stranger to death. When her husband died two years ago, her pleas for further investigation into his suspicious death fell on deaf ears. In desperate need of a fresh start, Kaine purchases an old house sight unseen in her grandfather’s Wisconsin hometown. But one look at the eerie, abandoned house immediately leaves her questioning her rash decision. And when the house’s dark history comes back with a vengeance, Kaine is forced to face the terrifying realization she has nowhere left to hide.

A century earlier, the house on Foster Hill holds nothing but painful memories for Ivy Thorpe. When an unidentified woman is found dead on the property, Ivy is compelled to discover her identity. Ivy’s search leads her into dangerous waters and, even as she works together with a man from her past, can she unravel the mystery before any other lives–including her own–are lost?

My review: Coming –  the Kindle book was on sale a few weeks ago. I’m about 1/4 of the way through this book and so far, it’s compelling and I’m especially enjoying the historical sections.

By the Hands of Men by Roy Griffis

Amazon Synopsis: Lieutenant Robert Fitzgerald has managed to retain his sanity, his humanity, and his honor during the hell of WWI’s trench warfare. Charlotte Braninov fled the shifting storm of the impending Russian Revolution for the less-threatening world of field camp medicine, serving as a nurse in the most hopeless of fronts. Their friendship creates a sanctuary both could cling to in the most desperate of times. Historical fiction about life, loss, and love, By the Hands of Men explores the power that lies within each of us to harm – or to heal – all those we touch.

My review:  Coming! I downloaded this for free or .99 recently.  I’m still reading it, but I finding the writing a bit dry at times. However, the story is compelling enough to make me keep going.

Amazon Synopsis: Penelope Wain believes that her lover, Neil Macrae, has been killed while serving overseas under her father. That he died apparently in disgrace does not alter her love for him, even though her father is insistent on his guilt. What neither Penelope or her father knows is that Neil is not dead, but has returned to Halifax to clear his name.

Hugh MacLennan’s first novel is a compelling romance set against the horrors of wartime and the catastrophic Halifax Explosion of December 6, 1917.

My review:  I could not put this book down.  Beautifully written with believable and well-developed characters.  I wouldn’t classify it as a romance, however.  It’s more historical fiction than romance, although there is a romance in it. I enjoyed the fact that it takes place in the days leading up to the Halifax Explosion and days after.  Highly recommend!  Five stars out of five. 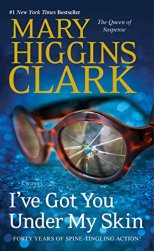 I’ve Got You Under My Skin by Mary Higgins Clark

Amazon Synopsis: In this gripping #1 New York Times bestseller from Queen of Suspense Mary Higgins Clark, a Manhattan ER doctor is brazenly murdered in front of his young son in a city playground. Five years later, his killer is still at large.

When Laurie Moran’s husband was brutally murdered, only three-year-old Timmy saw the face of his father’s killer. Five years later his piercing blue eyes still haunt Timmy’s dreams. Laurie is haunted by more—the killer’s threat to her son as he fled the scene: “Tell your mother she’s next, then it’s your turn…”

Now Laurie is dealing with murder again, this time as the producer of a true-crime, cold-case television show. The series will launch with the twenty-year-old unsolved murder of Betsy Powell. Betsy, a socialite, was found suffocated in her bed after a gala celebrating the graduation of her daughter and three friends. The sensational murder was news nationwide. Reopening the case in its lavish setting and with the cooperation of the surviving guests that night, Laurie is sure to have a hit on her hands. But when the estranged friends begin filming, it becomes clear each is hiding secrets…small and large.

And a pair of blue eyes is watching events unfold, too…

My review:  Coming! I’ve always enjoyed Mary Higgins Clark, although I have found that the books she’s written in the past ten years or so not as good as her earlier books.  However, this one was on sale for $3 at a local bookstore, so I scooped it up.  The fact that it’s only $3 for a hardcover book makes me suspicious that it probably will be much like the last five or so MHC books I’ve read.  But for $3, I’m willing to take that chance.